Franky Kossy is based in London’s Harley Street. She uses a wide range of kinesiology techniques to balance her clients health and wellness.
Franky Kossy has been practising Kinesiology in London for more than 20 years after a millennium reinvention leaving accounting and business behind. She trained in  London under the direction of Dr Jimmy Scott , founder of Health Kinesiology.
Kinesiology London has transformed Franky’s own personal life and has given her the tools to transform others.
Kinesiology is a powerful non invasive and gentle therapy. It uses a scientifically proven method called muscle response testing to identify imbalances in the bioenergy system, which can cause mental, physical and emotional dis-ease.  It combines the energy knowledge of chiropractic theory with acupuncture and adds a variety of techniques to release deep rooted blocks . Kinesiology London resolves most emotional and health problems transforming you into a healthier person.
Book An Appointment

I went through 13 years of chronic and often serious digestive problems, food intolerances and allergies following a serious illness in my late teens. This took me all the way through the NHS, private medicine and a plethora of alternative therapies. It’s no overstatement to say that Franky Kossy has changed my life. Not only am I no longer in a constant state of pain and exhaustion but a lot of the time I am full of energy and eat and enjoy all the food I love.

While I’m no longer usually unwell, I caught a virus in India a few months ago and again, she seems to have been the person who has made the most significant difference in my recovery. Highly recommended – I’m about to book her again! 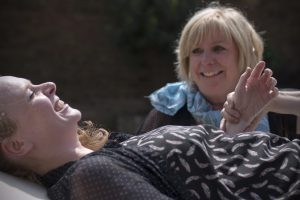 Amazing results for the following:

Kinesiology can produce outstanding results for all people in all walks of life.

By the time I went to Franky, I was very ill. I had suffered regular bouts of severe cystitis for decades and now it had become permanent and resistant to several antibiotics, with extreme pain, including screaming kidneys if I moved quickly. I had also become generally weak and shaky.

Cystitis eventually became controllable and pain levels reduced with each visit - to me, a miracle.

In addition, I was generally stronger and more agile again - and surprisingly not limping as much (would never otherwise have linked limping to !).

I came to see Franky and experience Health Kinesiology earlier this year as my symptoms from menopause were causing me discomfort on both a physical and mental level.

Franky, through her long experience of Health Kinesiology, has helped me rebalance my hormones and release emotional blocks I wasn't even conscious I was holding. My mood is now a lot lighter and calmer and I find myself feeling very hopeful even in times of stress and my physical state feels balanced and strong.

I find Health Kinesiology a great tool for keeping me healthy and upright during the menopause. Franky's approach is gentle and deep. I can highly recommend her to you.

I wasn’t sure what to expect when I first had a treatment with Franky, but even with an open mind, I was quite amazed by the results. After each treatment, a previously intransigent situation started to ease in a way that I could not have foreseen. It seemed that something shifted after each session, bringing a resolution that is peaceful and easy. Thank you , for your wonderful work.

This is the response from a client after one session with her autistic son.

Yes, he is a lot calmer and school and speech therapist has said he has moved on suddenly academically and socially! So definitely improving.

Your Health in Good Hands

How to find us

Use the map or the postcode W1G 9QD.  We are in Building 1-7 Harley Street, London.  This is our kinesiology clinic.  We also offer online kinesiology which is proving very popular and just as effective.